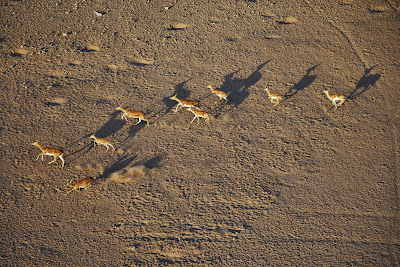 • Sir Bani Yas Island was originally developed as a private wildlife reserve by the late founder and president of the United Arab Emirates, Sheikh Zayed bin Sultan Al Nahyan in 1971 to ensure the survival of Arabia’s endangered species.

• Sir Bani Yas Island was opened to weekend visitors in the 1990s. These tours soon became so popular that visits at times had to be booked over one year in advance.

• Sir Bani Yas Island has a long history of human settlement dating back to the Bronze Age with the last settlement leaving around 110 years ago. To date some 36 archeological sites have been found on the island with the oldest remains being a pre-Islamic monastery dating back to 600 AD. Sir Bani Yas Island hopes to open up some of the sites to tourists in the near future.

• As part of the late Sheikh Zayed’s ‘Greening of the Desert’ programme, several million plants and trees have been planted.

• Sir Bani Yas Island is home to around 30 species of free-roaming animals.

• Key to the environmental and conservation efforts on the island is the creation of an Arabian Wildlife Park. This 4100 hectare area is dedicated to breeding and rehabilitation of animals indigenous to the Arabian Peninsula.

• The main animal species in the Park is the Critically Endangered Arabian Oryx. This unique indigenous animal has been classified as instinct in the wild since the 1960s. Today, Sir Bani Yas Island is home to a manage herd of over 400.

• The Arabian Wildlife Park is being developed to provide an authentic environment for Arabian animals to freely roam while the island remains an exceptional experience for visitors.

• Creating of the park is an ongoing process, which includes ongoing relocation animals bred successfully to the mainland, as international breeding programs.

• While creation of the Park is an ongoing effort, visitors are already today guided past the salt dome hilltops and wadis, by experienced island guides. Visitors will also have the chance to meet animals as they drive past the Park.

• Many species of wild birds found on the island are indigenous to the region, and several non-indigenous species have settled during migration and made the island their permanent home. Birdlife includes flamingos, sea gulls, cormorants, wild fowl, pintails, shovelers, blackwinged stilts, teals, crab plovers, avocets and grey herons.

• Sir Bani Yas Island is home to many animals that the International Union for Conservation of Nature classifies as critically endangered or vulnerable to the wild, including Sea Turtles, sand Gazelles, Blackbuck antelope, Urial sheep, Barbary sheep and Arabian Oryx. Therefore, the island plays a significant role in protecting these animals for future generations.

• Over the past year, more than 10,000 animals from Sir Bani Yas Island have been released into wildlife reserves in the Liwa Desert, on the Abu Dhabi mainland. This monumental programme has been carried out in conjunction with the Abu Dhabi Environment Agency.

• Game Drives: Experience the grand tour of Sir Bani Yas Island as you join our animal experts on a 2 hour wildlife adventure. Your guides will show you some of the island's largest (and smallest) animals and introduce you to the beautiful Sir Bani Yas natural landscapes.

• Mountain Biking: Leave the comfort of your hotel or campsite behind you as you journey across the mountain areas of Sir Bani Yas Island by mountain bike.

• Hiking: There´s no better way to explore the nature of Sir Bani Yas Island than on your own two feet. The island offers a variety of hiking experiences for all ages and levels of fitness. Feel a sense of achievement after reaching the top of the world´s largest salt-dome hilltops where you´ll be greeted with 360 degree island views.

• Kayaking: Explore the bird sanctuaries and large mangrove areas on the North-Eastern side of Sir Bani Yas Island by kayak. The quiet waters are perfect for paddling across and will truly provide an appreciation of the stunning nature and wildlife.
• Snorkeling: Discover the secrets of the world beneath the surface of the Arabian Gulf.
• Archery: Archery is a long-cherished tradition of Arabia. Sir Bani Yas will offer training and equipment for beginners and enthusiasts to practise archery under expert guidance. Each archery session takes around two hours. .

• Guests coming to Sir Bani Yas will have access to a new Equestrian Centre with local Arabian horses which will be completed by end of 2009.

• A Youth education and outdoor camp will be developed as a non-profit adventure-education programmes emphasising personal growth through experience and challenge in the wilderness.

• A diving centre is also scheduled to open early 2010. The centre will offer classes for visitors who would like to get diving certificates, renting of diving kits and diving experience.

• Further expansion at the Anantara Desert Islands Resort & Spa to include a Conference Centre which will accommodate up to 250 guests. The centre will consist of 8 breakaways rooms and a boardroom. Completion date is scheduled for 2010.

• Al Yamm Lodge is one of four lodge projects to be introduced. Placed by the water edge it will offer an intimate, feet-in-the-sand design concept inspired by the barasti of the early fishermen who lived seasonally on the island. From its location, guests will enjoy the surrounding mangrove forests and intertidal lagoon with wading flamingos and dugongs. Lodge will be competed and open to public in the first half of 2010.

• In the heart of the Arabian Wildlife Park lie the Al Barari Lodge comprising 50 units. The park is a key destination on Sir Bani Yas and will be one of the few places in the Arab Region where guests will be able to view wildlife from their lodges in a lush savannah-like environment. Lodge will be competed and open to public by 2010.

• By the salt domes, in the middle of Sir Bani Yas Island, the Al Bahar Lodge is positioned on the southern development zone on a slightly raised promontory along a beautiful stretch of the coastline. The Cliffside Lodge comprises 50 units with sea view and down across the bay golf estate and private access to the lagoon. The lodge will be completed and open to public by 2011.

• The 50 unit Al Muntaha Lodge will be perched high among the rocky slopes of the island’s salt dome, it will provide a luxurious mountaintop experience right in the heart of the Arabian Wildlife Park. The lodge will be competed and open to public by 2011.
Posted by Imre Solt at Monday, May 11, 2009

Ahaa, its fastidious dialogue regarding this post here at this web site, I have read all that, so now
me also commenting here.