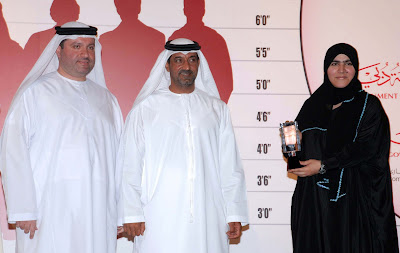 Dubai Municipality has won the Best Profit Making Suggestion Award in the 4th Ideas.Arabia Awards. A team of experts representing various industries selected the winners in the Fourth International Ideas.Arabia Conference held under the theme "Innovation: Solution or Reason of the Problem."

The award was presented by Sheikh Ahmed Bin Saeed Al Maktoum, Chairman of Dubai Civil Aviation, President of Emirates Airlines and the honorary sponsor of the Dubai Quality Award Group to Khalid Abdulrahim Abdullah, Director of Customer Relations Department and Mariam Ahmed Bin Fahad, Head of the Suggestions and Complaints Section in the Municipality. The award recognizes every year the most significant ideas, implemented by various companies, for their substantial benefits to the institution as well as to the concerned departments.

As part of the Municipality's focus on innovation and creativity and its role in raising the corporate performance level, it motivates and encourages the employees to create new and distinctive ideas and apply them effectively.

The Municipality witnessed a significant growth in the number of suggestions it received in 2008 as the total number of suggestions reached 5,099 last year. It participates and reviews the best local and global practices concerning suggestions that cater to the employees' creativity through its annual participation in the Arab and global awards including EIA/UK Award and has won 10 awards in different categories so far.
Posted by Imre Solt at Thursday, May 07, 2009