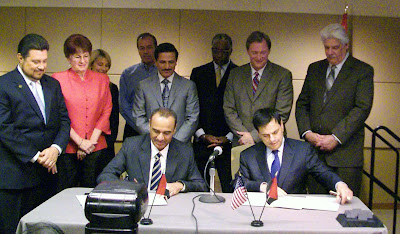 Dubai and the US city of Phoenix signed a Memorandum of Understanding and Cooperation aimed at cementing friendship and cooperation, exchanging expertise and supporting economic and tourism projects between the two cities.

The MOU was signed between Eng. Hussein Nasser Lootah, Director General of Dubai Municipality and Phil Jordan, the Mayor of Phoenix in the presence of Sultan Saeed Al Mansouri, the UAE Minister of Economy.

The agreement comes in line with the excellent friendship relations between the UAE and the US, and as part of the strategic partnership that promotes the efforts to strengthen mutual interactions between the two countries in all fields including the economy, culture and education.

Dubai has already entered in to similar agreements with 16 cities from various continents around the world.

During his address to the Municipal Council, Lootah underlined the importance of such agreements in promoting cooperation and friendship between cities, noting that Dubai carefully selects its sister cities for agreements of cooperation.

He said that both Dubai and Phoenix share several common characteristics such as weather, economy and population growth and there is a common desire to foster cooperation in other related areas.

Lootah noted that mutual visits between the officials of both cities had cleared the way for laying the foundations of the MOU, adding that the agreement would be a shot in the arm for the entire municipal work in Dubai in the same way that previous agreements benefited the city.

Al Mansouri said that the relations between the UAE and the US, translated into several agreements and MOUs, are solid and friendly, and the recent agreement in municipal work will further boost the existing relations.
He added that the large scale projects that are being implemented in the UAE had already attracted profound international attention making Dubai a prominent tourist and business destination. It was certain that the agreement was set on solid foundations and both sides have expertise and sincere desire to discuss its various aspects, Al Mansouri said.

The delegation also participated in the meetings of the 5th World Cities Forum convened in Chicago which was attended by the US Vice President.
Posted by Imre Solt at Thursday, May 14, 2009