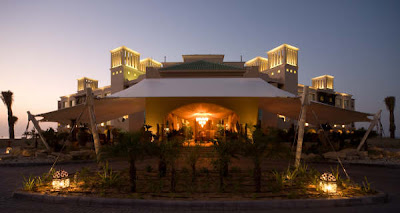 
Dubai, UAE - May 2009: Tourism Development & Investment Company (TDIC), a master developer of major tourism destinations in Abu Dhabi, has announced today exciting hospitality developments on Sir Bani Yas Island. The company is introducing four new luxury lodges which will offer additional 190 hotel rooms to guests when they are completed by 2011, as well as the Arabian Wildlife Park, a conference centre and several environmentally friendly tourism initiatives.

One of the major highlights on the island is the development of the Arabian Wildlife Park, which takes up approximately half the size of Sir Bani Yas Island. The park reflects a continuous wildlife rehabilitation and conservation initiative, providing an authentic environment for wild animals to freely roam while the island remains an exceptional experience for visitors.

The park, which is Arabia’s largest breeding project, will house numerous species of animals indigenous to the Arabian Peninsula including the Arabian Oryx, Sand Gazelle and Mountain Gazelle as well as free-roaming predators and scavengers such as the cheetah and hyena. It is believed this is the first time that cheetahs and hyenas have been rehabilitated and released into the wild in the region.

“Phase One of the Desert Islands development witnessed the opening of the luxurious Anantara Desert Islands Resort & Spa in October 2008. It also included the upgrade of the existing regional airport, the inauguration of a dedicated air service to the island from Abu Dhabi International Airport and a new arrivals and departures terminal. The feedback we received from our guests was very encouraging and the demand remains high; therefore we decided to accelerate our plans to add more facilities and activities on the island,” said Lee Tabler, Chief Executive Officer, TDIC.

“Sir Bani Yas Island is a real-life showcase for Abu Dhabi tourism. This new development will provide a unique blend of hospitality and wildlife experiences which means more nature and adventure seekers will have the opportunity to enjoy what this amazing island has to offer,” Tabler added.

Out of the four lodges, Al Yamm and Al Barari will be the first to open in 2010. The 40-unit Al Yamm Lodge will sit by the water’s edge and offer an intimate feet-in-the-sand design concept inspired by the barasti, the traditional fishermen who lived seasonally on the island.
The 50-unit Al Barari Lodge is one of the very few places in the Middle East where guests can witness wildlife activity from their lodges in a lush savannah-like environment.

Meanwhile, AL Bahar and Al Muntaha lodges are both set for completion in 2011. The 50-unit Al Bahar Lodge will be situated on a peninsula in the island’s southern region with stunning sea view rooms. Perched high among the rocky slopes of the salt domes will be the 50-unit Al Muntaha Lodge, providing a luxurious mountaintop experience right in the heart of the Arabian Wildlife Park.

“The four lodges complement the nature-based tourism feel of the destination yet offer a variety of choices to guests and nature admirers. Desert Islands has become the prime destination in the region for an authentic Arabian getaway where one can choose between lodges located among free-roaming wildlife or on pristine beach locations offering stunning sea views over the Arabian Gulf,” said James Pringle, TDIC’s Executive Director of Development. “The lodges will offer magnificent floor-to-ceiling views of sand-capped salt dome hilltops, rich greenery of the Arabian Wildlife Park or the sunset cascading over the vibrant coastline of the Arabian Gulf,” Pringle added.

TDIC will also introduce a diving and sports centre on the island which will be ready by 2010. Other projects include the launch of an equestrian centre by the end of 2009 and youth education and outdoor activity camp with programmes emphasising personal growth through experience and challenge in the wilderness by 2010.

The 64-room Anantara Desert Islands Resort & Spa on Sir Bani Yas Island, which was named among the region’s top two hotels in Conde Nast Traveller’s 2009 Hot List, will also witness the inauguration of the Anantara Conference Centre - a social, business and meeting facility in an idyllic and secluded setting. The centre, which will be built by 2010, will accommodate up to 250 in its major conference hall along with eight breakaway rooms and a boardroom for corporate and social functions.

This island currently offers 4x4 guided tours of the Arabian Wildlife Park, mountain biking and hiking on the island’s rugged salt domes, kayaking through the lush mangrove reserve, and snorkelling in the marine-rich waters off the island.

Adventurers looking to experience Sir Bani Yas Island can book online at www.desertislands.com
Posted by Imre Solt at Monday, May 11, 2009