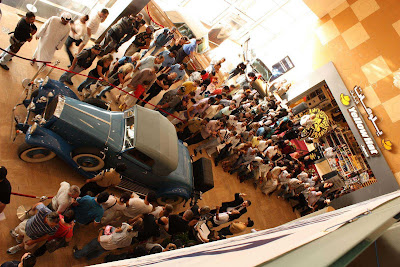 The "2010 Dubai Classic Car Auction" organised recently by Leo Sterling, UAE’s premier select property portfolio managers, in collaboration with auto accessory superstore Yellow Hat, generated a total of AED 343,000 through the sale of four cars and a motorcycle. The organisers revealed that a percentage of the proceeds is being donated to Dubai Autism Center, in line with efforts to raise awareness about Autism. The auction was organised under the patronage of Mohammed Bin Sulayem, FIA Vice President and President of the Automobile and Touring Club of the UAE (ATCUAE).

Held at Times Square Center (TSC), the "2010 Dubai Classic Car Auction", featured everything from antique, vintage and classic cars, to trucks and motorcycles, 4x4s, historically significant vehicles, military vehicles, and all other unique and/or custom vehicles. The cars that were auctioned off included a 1968 model Camaro SS, a 1990 Bentley, a custom-made Porsche and a 1968 model Mercedes Benz 280SL convertible which fetched AED 150,000. The motorcycle that was auctioned off was an 883CC Sportster engine Old School.

Anthony J O’Donnell, General Manager, Times Square Center, said: “The overwhelming response generated by this auction goes to show that there exists a relatively untapped market for classic cars in Dubai. Given the favourable outcome of this auction we are seriously considering making this an annual affair, especially since it also benefits a charitable organisation.”

Bruno Martorano, Managing Director of Leo Sterling, said: “The 2010 Dubai Classic Car Auction was, more than anything, a celebration of UAE’s reputation of being a car lover’s paradise. The success of this auction, in terms of the range of cars that were part of the auction and the sales that took place on the day, was truly inspiring. We are also pleased to donate part of the proceeds from the auction to Dubai Autism Center, which we believe will help the Center in its efforts to create greater awareness about Autism among children.”

The "2010 Dubai Classic Car Auction" was supported by Desert Warriors Dubai, a leading motorcycle club in the UAE that is committed to driving awareness for social causes, while Russian Radio was the media sponsor for the event.

A selection of the cars that were part of the auction was showcased at TSC three days prior to the auction day. The auction concluded with a large group of bikers representing Desert Warriors Dubai proceeding on a parade from Times Square Center along Sheikh Zayed road.
Posted by Imre Solt at Sunday, April 18, 2010