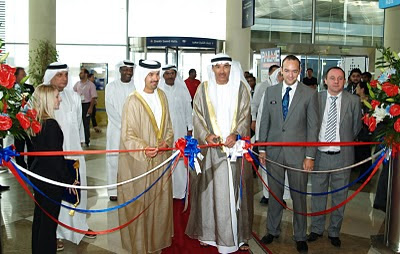 Closed airports have not stood in the way of attending this year’s PALME exhibition, highlighting its importance among the international AV and entertainment industry.

“PALME has always been an important show at which to do business and this year is no exception. The exhibition has grown 10 per cent compared to 2009, proving the importance of the date on the international entertainment calendar,” said Alex Heuff, Exhibition Director of PALME Middle East.

The team from A.C. Entertainment Technologies drove through the night to Nice, France, from London to board a flight to Dubai, arriving at 1am this morning to make the show.

“We said we would be at the show and when we say something we mean it but this is also an important trade show in the Middle East and the only one we exhibit at,” said Cally Bacchus, International Sales Director for A.C. Entertainment Technologies.

During his tour, Mr Lootah saw many of the new technologies on offer at the show, including the home automation system devised by Circuit Gulf.
“He liked that he could control everything in the house from one device and said he would be able to use it to turn down the volume on his children’s TVs,” said Nathan Williams, Circuit Gulf General Manager, which is also exhibiting its CosyHome iPhone application.

Elsewhere, Mr Lootah took a seat to watch a laser show by Laserworld (Switzerland) before heading to the NEC stand where he viewed the latest mapping and 3D technologies.

Ian Gobey, Sales Director, NEC Display Solutions, said: “He asked about our products and what market segment we sell them to. He also asked if we had 3D projectors that don’t require glasses, but we, like everyone else in the market, are not quite there yet.”

The exhibition, which runs until Tuesday, in Halls 2-4 at the Dubai International Exhibition Centre, features more than 200 from 30 countries showcasing 800 brands.

The annual PALME Middle East Awards 2010 will take place tomorrow night in the Al Multaqua Ballroom at the Dubai International Convention and Exhibition Centre, recognising the leading industry players in such categories as Best Entertainment Venue in the Middle East and Most Innovative New AV Product of the Year.

Meanwhile, more than 30 speakers from leading companies across all areas of the industry are participating in conferences and seminars during the event focusing on systems integration and lighting. In addition, there will be a comprehensive education programme by leading industry professionals including certified courses on the latest technologies and techniques from education providers.