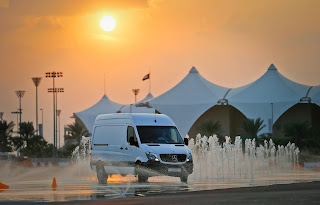 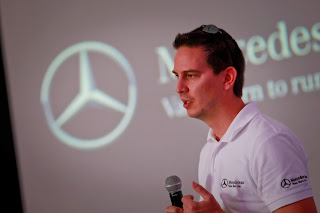 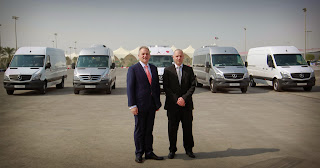 Mercedes-Benz today announced the arrival of the new Sprinter, the leader in the large van class, in the Middle East. Now on sale in showrooms across the region, the entry level Sprinter 216 Panel van comes with a starting price of $32,100, while the top of the range Sprinter 524 Hotel Bus starts at $110,500.

The Mercedes-Benz Sprinter has given its name to an entire vehicle class and is synonymous around the world with large vans with a permissible gross vehicle weight of up to 5.0 tons. It has always been the leader in its class in terms of innovation, and the new Sprinter is again setting the benchmark and demonstrating this to impressive effect, with five new safety systems as well as a range of powerful engines to meet Middle East customers’ requirements. But it’s not all about performance - the new Sprinter presents a striking and dynamic new look.
During the launch event at Yas Marina Circuit, UAE, guests were able to test the new Sprinter on slippery, wet surfaces and witness first-hand the all-new and innovative safety systems it features. Also present was National Ambulance of Abu Dhabi, the UAE’s leading provider of emergency pre-hospital care. The company, which already operates a number of Sprinters, performed an interactive display to show how the new Sprinter can be used to save lives.

“Over the years, the Mercedes-Benz Sprinter has established an extremely strong reputation in the commercial vehicle market. The new Sprinter is set to take the model forward, positioning it even more firmly as the benchmark in the sector and appealing to even more customers across the region,” commented Christoph Walther, Head of Sales and Marketing for Mercedes-Benz Vans.

' Over the years, the Mercedes-Benz Sprinter has found its way to many satisfied customers around the Middle East. Guests of premium hotels appreciate the comfort and convenience when being transported around in the Sprinter, while parents trust the school bus version thanks to its advanced safety features. Parcel services or bakeries depend on the reliability and versatility of the Sprinter to deliver their goods on time, and when it comes to critical situations, the Sprinter stands out in its Ambulance guise.”

Traditionally the Sprinter has been the pioneer for driver assistance and safety systems. An Adaptive ESP System, ABS and a driver airbag is on board of every Sprinter for years by now. In the new Sprinter, five additional assistance systems – including some world premieres in the van segment – are helping to further reduce the number of accidents. Celebrating their world premiere in the Sprinter are the Crosswind Assist as well as the optional Collision Prevention Assist. Also new are the Blind Spot, Lane Keeping and High Beam Assist.

Crosswind Assist as a feature of the Electronic Stability Program will form part of the standard equipment for all panel vans and crew buses. The other assistance systems can be ordered as individual extras or logically compiled packages. Each buyer can individually tailor their Sprinter to the respective application.

The developers at Mercedes-Benz are convinced that the use of electronic aids in the van segment will have an extremely positive impact on accident statistics which is particularly important when transporting up to 22 passengers in the new Sprinter Mini Buses.

In addition, Mercedes-Benz has further enhanced the driving dynamics of the Sprinter. A lowering of the chassis has helped not only to reduce wind resistance and consumption, but also to further increase road safety and make loading and unloading more convenient.

The new Sprinter is the first van to emerge with a complete engine range which complies with Euro 3 as well as up to the Euro VI emission standards. This means a drastic reduction in emission levels for nitrogen oxide (NOx), hydrocarbons (THC) and particulates. For the Middle East, petrol engines complying up to Euro 6 and diesel engines up to Euro 4 emission standard will be available. Two petrol engines, a four cylinder 156HP and a six cylinder 258HP as well as two four cylinder diesel engines with 116 and 150HP are offered in the Middle East. An automatic gearbox is standard in combination with the V6 petrol engine and optional for the four cylinder petrol. All diesel engines are paired with the 6-speed ECO Gear manual transmission.
The combination of the highly economical diesel engines, optimised drive train and ancillary equipment results in a combined fuel consumption starting from 6.3 l/100 km – a sensational new record figure for the Sprinter's vehicle class.
Visually, the new Sprinter also makes a clear-cut and striking impression. In keeping with the current Mercedes-Benz design line, the radiator grille appears more upright and self-assured. The three radiator louvres are swept back and perforated. This not only underscores the dynamic impression, but at the same time also increases the air flow. The brand's hallmark radiator grille is made more striking thanks to a bevelled surround.
The headlamps feature sharper contours, and a particularly striking feature is the masking of the reflector housings which divides the headlamps into individual segments. The new bonnet is higher, resulting in improved protection for pedestrians, and the bumper features a more pronounced shape.

The detailed attention paid to the design on its underside makes it reminiscent of an SUV. From the rear, the new Sprinter is still recognisable from its two-compartment tail lights.

The indisputably exemplary interior has been upgraded even further. New seat upholstery and a new cover provide for enhanced comfort. The steering wheel features better grip with a thick rim, and the fresh air vents are embellished with chrome applications. The shift lever knob sports a new design too.

With the new radio generation, state-of-the-art consumer electronics featuring Bluetooth telephony with telephone keypad and phone book have found their way into the Sprinter.

The descriptions and information in this press kit apply to Mercedes-Benz's international model range. Different specifications may apply in other countries.
Posted by Imre Solt at Tuesday, November 19, 2013