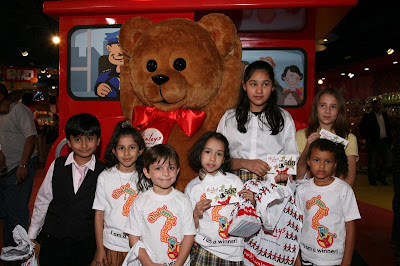 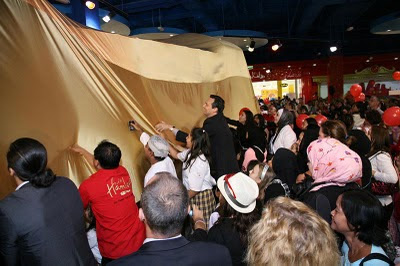 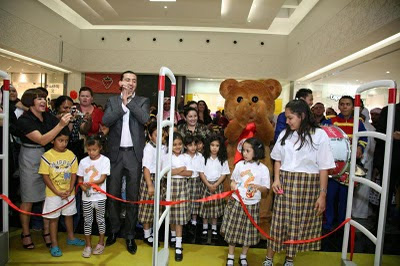 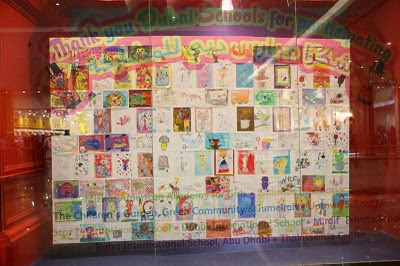 
Dubai, March 17th, 2010: Hamleys, the world-famous toy retailer, yesterday )March 16th, 2010) announced the opening of its second store in the UAE located at the Mirdif City Centre. Eight winners from a nationwide drawing competition to “draw your favourite toy”, were invited, along with their classmates to participate in the opening parade, with winners each receiving a AED 500 gift voucher to spend within the store as well as seeing their drawings enlarged and framed as a permanent feature within the store.

The official opening began with a parade of children led by the Hamleys bear and band towards the Hamleys store where they were greeted by live radio DJ and Hamleys staff giving out party bags. Within the new interactive store, a replica of a red double-decker London bus was unveiled, as children explored the 22,000 square foot store which features a chrome race track where kids can test the latest remote control cars, a Girls World Doll house and a Disney cinema, as well as all their favourite quality toys, synonymous with Hamleys Stores. The new store also features a Hamleys Party Room, which offers customized birthday parties complete with a play area featuring a bouncy castle and bicycle track.

Nabil Daud, Managing Director and CEO of Retail Arabia International, partner of Hamleys in the Middle East, said: "Retail Arabia International is thrilled to open a new Hamleys store at the Mirdif City Centre which will serve a large local and expatriate community. Building on the success of the inaugural store at Dubai Mall which has been enthusiastically received by children and parents alike, the second Hamleys store has been strategically located to allow us to expand our presence in areas and communities where the Hamleys brand and its extensive array of premium-quality toys are widely anticipated."

Nabil Daud went on to say,”Children are the focus of our business, we listen to and learn from their comments, for that reason, we have involved as many local and international schools as possible into the opening of Hamleys at Mirdif City Centre.”

Hamleys is an internationally-recognised toy retailer with ambitious plans to grow the brand further. The flagship store on Regent Street, with over seven floors packed full of toys and games, is considered to be one of London’s major tourist attractions and receives about 5 million visitors a year. The company has developed an international reputation for choice, quality, and innovation.

About Hamleys
Hamleys is the UK’s greatest toy retailer, famous for its magical atmosphere and huge range of toys, from much loved brands to more traditional and specialty treasures. It was established nearly 250 years ago by William Hamley and its flagship store on London’s Regent Street has become a global icon within the toy industry and is among the top 10 most visited tourist destinations in London. Hamleys at The Dubai Mall occupies an anchor location of 32,000 square feet, and showcase more than 100,000 toys, gifts and gadgets from traditional favourites to the most up-to-date toys on the market. All products bear the Hamleys stamp of creativity, fun, quality and safety as well as educational play value.
Posted by Imre Solt at Friday, March 19, 2010