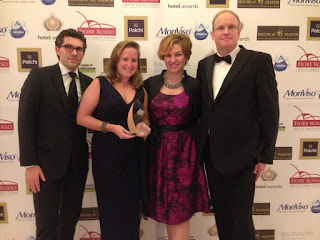 Dubai, United Arab Emirates, 10 June 2015: The Middle East Hotel Awards, the prestigious event that seeks to identify, highlight and reward excellence across the region’s hotel industry, have recognised Atlantis, The Palm’s Aquaventure in the ‘Best Recreation Facilities’ category, reinforcing its status as a must-visit international destination.

Aquaventure, the ideal family attraction, is the largest and most excitement-packed water-themed experience attraction in Dubai and the No. 1 waterpark in Middle East and Europe. An icon of the Dubai tourism scene, guests at Atlantis, The Palm receive unlimited access to the waterpark with each visit.
“Two years ago, Aquaventure underwent a massive expansion, strengthening its position as the finest waterpark in Middle East and Europe,” says Scott Deisley, Vice President, Aquaventure Operations at Atlantis, The Palm. “We are extremely proud to be recognised at The Middle East Hotel Awards in the ‘Best Recreation Facilities’ category. We will continue to exceed the expectations of our guests, offering them a fun-filled adventurous summer experience this year.”

Rising from the Arabian Gulf, Aquaventure contains 18 million litres of fresh water that is used to power 11 thrilling waterslides and a 2.3 km river ride with tidal waves and pools, water rapids and white water chargers. The waterpark includes awe inspiring water rides, a record breaking zipline circuit and non-stop water play, the signature elements of Aquaventure Waterpark.  It spans 17 beachfront hectares along the apex of The Palm’s crescent, and two enormous towers packed with rides including Poseidon’s Revenge which offers the most extreme thrills with two trapdoors, a terrifying 20 metre drop and the first duel racing loops in the world, and Slitherine, the world’s first ever dual waterslides within a waterslide allowing competitive friends to race all the way to the bottom with a timer system displaying scores at the end. In addition to Aquaconda and Zoomerango are thrilling six person rafting adventures.  Aquaconda is the world’s largest waterslide and offers fun careening while Zoomerango has a huge near vertical drop before riders hit a massive vertical wall that allows them to experience weightlessness. Atlantean Flyers which is the longest zipline circuit in the Middle East and offers a thrilling treetop view of the park, beach and The Palm Island.

Atlantis, The Palm, Dubai earlier launched its summer packages that include, in addition unlimited access to Aquaventure, daily breakfast and lunch or dinner for every night of stay, along with unlimited access to the mythical Lost Chambers Aquarium boasting over 65,000 marine animals. Added extras also include free entrance to Atlantis Kids Club or Club Rush per child per day, preferential rates of up to 30% off retail price when swimming with the dolphins at Dolphin Bay or meeting the sea lions at Sealion Point as well as a 2 for 1 head, neck and shoulder massage at ShuiQi Spa.

This year’s edition of The Middle East Hotel Awards attracted record number of entries. 50 hotels were shortlisted in 21 categories, out of a total of 400 entries.

About Atlantis, The Palm, Dubai
Atlantis, The Palm is the first entertainment resort destination in the region and located at the centre of the crescent of The Palm in Dubai. Opened in September 2008, the unique ocean-themed resort features a variety of marine and entertainment attractions, as well as 17 hectares of waterscape amusement at Aquaventure Waterpark, all within a 46 hectare site. It is home to one of the largest open-air marine habitats in the world, with over 65,000 marine animals in lagoons and displays including The Lost Chambers Aquarium, a maze of underwater corridors and passageways providing a journey through ancient Atlantis. Aquaventure features 18 million litres of fresh water used to power thrilling waterslides, a 2.3 kilometre river ride with tidal waves and pools, water rapids and white water chargers. Dolphin Bay, the unparalleled dolphin conservation and education habitat, and Sea Lion Point were created to provide guests a once in a lifetime opportunity to learn more about one of nature’s most friendly mammals.  Atlantis, The Palm is also known as the culinary destination in the region with a collection of world-renowned restaurants including Nobu and Ronda Locatelli. The resort boasts an impressive collection of luxury boutiques and shops as well as extensive meeting and convention facilities.
Posted by Imre Solt at Thursday, June 11, 2015

Dubai invites guests throughout the entire year. It is established in the 'Islam religion' and every one of the sightseers are required to take after their lifestyles. Islam gives quality, motivation, and touches every one of the parts of life in the city. The city has various delightful mosques sprawled in each area. It is required for each Muslim to do five times of supplications to God every day. The biggest of all and the most lovely mosques is Jumeirah Mosque, an absolute necessity watch. palm jumeirah property

A one stop consultancy solution for all your business & marketing needs to profitably reach out to your targeted customers. edurar providing list of Companies in Dubai, Business Directory in Dubai, Services in Dubai, Products in Dubai and Brands in Dubai.

We are offering high class indian call girls in dubai we have serve most sensuous or beautiful hot girls. Our hot girls are always on the lookout for new ways to make her clients feel happy. Our indian escorts in dubai are sweet and naughty girl with a huge sex appeal and the best escort’s experience. WhatsApp or call today for booking and details +971558396277

We are from Dubai, United Arab Emirates. We have sweetest call girls. Young and passionate wench who does not fear to experiment and explore new places, cities and look for the fresh opportunities Pakistani escort in dubai. We have to move and be in so many towns as we can cover so We can be a good escort for you in business trips, travelling, events, meetings, ceremonies and so force Indian . We have Indian Escort in Dubai. We provide Sexy Desi Call Girls in Dubai. For Best Dubai Escorts Service Call +971523202298.
Indian Escorts In Sharjah //
New Pakistani Escort In Sharjah //
Russian Female Escorts In Dubai //

This is the reason why I am so much successful as one of the Dubai call girls and never let anyone dominate my life the way I want.
Dubai Call Girls

To get whole reputed escort carrier by way of manner of using manner of moon to night time time, in reality plan a holiday in dubai and it is whole of the big choice of the indian escort girls in dubai with the age of 18 to 20-eight. in the long run, it's far going to be the fantastic palace for the patron to enjoy a night time time time with specific way. however, the escort ladies particularly devoted time to perform the dream of every consumer out with one of a kind manner. The escort women make you more pleasure on gambling with you and that they get dressed warmness and appealing constant with the client choice so it meets all form of manual to spend the night time with the teenager women.
escorts in dubai
Model escorts in dubai

DO YOU NEED A LOAN : TRUST ME WE CAN SOLVE YOUR FINANCE PROBLEM
Do you need Personal Loan?
Business Cash Loan?
Unsecured Loan
Fast and Simple Loan?
Quick Application Process?
Approvals within 24-72 Hours?
No Hidden Fees Loan?
Funding in less than 1 Week?
Get unsecured working capital?
Contact Us At : urbansuccessfundings@gmail.com
Phone number :+1-724-9771-197 (Whatsapp Only)

Hello, an amazing Information dude. Thanks for sharing this nice information with us. Bed space in al rigga

We are a well-established escort agency in Dubai. We are providing dating services. We are available 24/7. We have the collection of best Indian Escorts in Dubai. We have Indian Dubai escorts, Turkish Dubai Escorts, Pakistani Dubai Escorts. We have Top Dubai Escorts. People want to spend their time with a girl we make it easy for you to escort a good-looking girl at your doorstep.
http://dxbangels.com/

Nice article. You articulate everything in a proper way. I really enjoyed reading .keep going. All the best

Are you a business man or woman? Do you need funds to start up your own business? Do you need a loan to settle your debt or pay off your bills or start a nice business? Do you need funds to finance your project? We Offer guaranteed loan services of any amount and to any part of the world for (Individuals, Companies, Realtor and Corporate Bodies) at our superb interest rate of 3%. For application and more information send replies to the following E-mail address: standardonlineinvestment@gmail.com
Thanks and look forward to your prompt reply.
Regards,
Mr. Hameed Youssef
Marketing Manager
Standard Online Finance Company Limited.

Very informative post and really appreciable. Keep doing great work like this.
Check out this fastest SATTA KING 786 or

Being addicted to opioids and heroin is more dangerous than the withdrawal; regardless, the symptoms of withdrawal can be extremely rough. Luckily, a clinician coupled with a successful treatment program can help ease the symptoms of opioid withdrawal, cutting back on the uncomfortable feelings that come along with it.

How to get Indian Bank CIF number

"But it's not a great way to lose weight, because you'll gain it all back -- you yo-yo. It's just like the Atkins diet. The weight you lose is water weight." Just don't look at water fasts or juice diets as a weight-loss solution. As with the Atkins diet, restricting carbohydrates causes you to lose weight -- but you'll gain it all back, says Dillard.