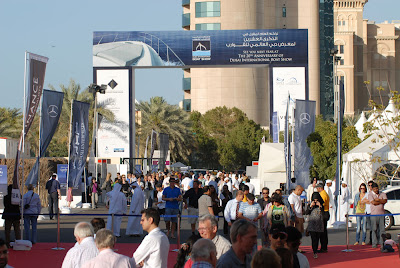 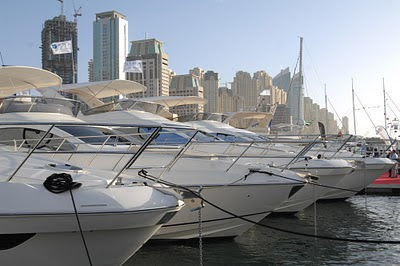 Over AED 500 Million Onsite Sales in Series of Landmark Firsts

Dubai International Boat Show rounded off a week of records with exhibitors’ sales expected to reach AED 1 billion as a direct result of the show. Exhibitors and visitors from across five contents hailed the event as one of the most successful and impressive shows in recent years.

With more than 750 international companies and brands taking part, Dubai International Boat Show attracted more than 26,000 visitors and recorded around AED 500 million worth of onsite sales, with exhibitors expecting around the same value to come, making the show the most effective springboard for many companies looking to expand into the region and beyond.

ART Marine, one of the boat show’s largest exhibitors reported record-breaking sales totaling AED 240 million during the show, with more to come as a result of their participation. “The Dubai International Boat Show has been a leading networking platform and a premier showcase event for the leisure marine industry in the Middle East,” said Constantinos Constantinou, CEO, ART Marine. “These are strong results and the quality products represented by ART Marine, along with our reputation for providing the ultimate in customer service, have once again shown our unrivalled commitment to our clients.”

Helal Saeed Almarri, CEO, Dubai World Trade Centre, organiser of the event said: “This event not only confirms that the leisure marine industry has a strong and a healthy future in the Middle East, it also illustrates the show’s fundamental importance as a business channel to the rest of the world. For nearly two decades the Dubai International Boat Show has driven the industry to push new boundaries, both financially and geographically and this year’s edition has reinforced its position as one of the five top boat shows in the world as a sales and business platform.”

Gulf Craft, who have been participating in Dubai International Boat Show since its first edition in 1992 introduced four world launches and recorded sales at this year’s show of AED 70 million. Mohammed Hussain Alshaali, Chairman, Gulf Craft commented: "The Dubai International Boat Show has cemented its position as a prominent show in the international boating calendar. Gulf Craft continues to consider the event as one of its most important marketing platforms of the year, launching four new designs to the world in 2011. It is the ideal opportunity for prospective owners to gain first-hand experience of the quality, craftsmanship, and value for money that have made Gulf Craft a major player in the international market for luxury yachts and leisure craft."

One of the show’s many spectacular highlights was the record sale of a 40 metre Sunseeker superyacht, which was bought for AED 100 million. Arif Oomer, Director, Sunseeker Middle East said: “This show is indisputably the Middle East’s flagship event for the marine industry, and for exhibitors there is no better business platform. The calibre and quality of the visitors to this event is consistently exceptionally high and the international contingent this year is more impressive than ever.”

The show set off at a lightning pace, when a AED 1.4 million fishing cruiser on display at Al Dhaen’s stand was sold less than an hour after the show’s opening ceremony. Abdulla Alfahal, Director Administration of Al Dhaen Group from Bahrain, said: “This has been a wonderful show for us and the sales results are fantastic. The Dubai Boat Show is known not just through the Middle East, but internationally and it is the ultimate event to conduct business. I leave this show with five out of seven boats sold onsite and I expect many more orders to follow. We are the proof that this show is essential for all marine businesses in the global as well as regional market.” One of the deals to be signed after attending the show includes an order from the Government of Sudan for 45 boats worth AED 18.5 million.

Many new international exhibitors at the show confirmed it as one of the most impressive events on the international marine calendar. “I would without question put this event on a par with Monaco and it could certainly teach Fort Lauderdale a few lessons about putting on a truly international boat show,” said Howard Rogers, Director of Marketing at UMT Marine, a marine technology and innovation company based in Florida, which was making its debut this year. “We have visited boats shows all over the world for the last 15 years and Dubai has been an exceptional experience, particularly in spending time with some of the largest superyacht companies and the business that leads to. It is a superb trade generator for worldwide marine businesses.”

More than 425 breathtaking yachts and boats on water and dry land, and dedicated supplies and luxury services areas attracted a host of leading international exhibitors. Bangladesh, Belgium, Czech Republic, Monaco, Oman, Singapore, Sri Lanka and the Ukraine all joined the show’s growing list of global participants.
Mary-Anne Edwards, CEO, Australian International Marine Export Group, the globally recognised brand for the Australian marine industry, said: “Interest in the Australian Pavilion was high with all exhibitors either making sales or some excellent leads and contacts. In fact, it was felt the business done at the show was for some at least double previous years. The Dubai International Boat Show is a vital platform for the Australian exhibitors, it attracts businesses from all over the world, including those from key growth markets such as India and Russia, and the response they have received from this event is excellent on all business levels.”
The event attracted visitors and boating professionals from across the world, from enthusiasts to fanatics. “I have visited boat shows in Europe and the US, and Dubai is certainly one of the best for browsing as well as buying. The international brands ensure that everything is here from the huge superyachts to diving kits, and the whole ambience makes for an outstanding event,” said Sean Bayliss from the United States.

The prestige of the show was again highlighted with a record number of global premieres and regional launches. Eleven boats and other marine products were unveiled for the first time anywhere in the world and thirty were put on sale for the first time in the Middle East.

Chris Tanner, Director of Wave Craft, a marine performance company from Hampshire in the UK, said: “It was an absolutely fantastic show for us. We took part in the Southampton boat show last year and the Florida Boat Show just before we came to Dubai and sold around a third of our stock at each event. At the Dubai International Boat Show, we completely sold out and are still taking orders for more. To sell three times as many products as we did at two of the other most famous shows in the world is a testament to the success of the show and the target audience it attracts.”
The 19th edition of Dubai International Boat Show welcomed more members of the world’s most prestigious superyacht builders association (SYBAss) than ever before in its history. Eleven of the most illustrious names gathered together for the first time in Dubai. “The Dubai International Boat Show is a vital platform for some of the most impressive and best known superyacht builders and a natural choice for the highest calibre companies,” said Michael Breman, Sales Director, Lürssen Yachts, and President of SYBAss. “And this event is by far the best in the Middle East to both illustrate and increase Lürssen's international success,”

The Supercar Promenade made its first appearance alongside the show, with some of the motoring world’s most elite luxury brands wowing the crowds. One of the stars of the show, a Bentley Continental Flying Spur Speed was sold for just under AED1 million. George Duncan, General Manager, Prestige Cars, said: “This was an extremely successful show for Bentley Emirates. The sale of the model we had on display is fantastic, and the visibility and the opportunity for us to showcase our prestige brand have been equally valuable. The Supercar Promenade is an excellent feature to run alongside the boat show, and the exposure to a truly international audience from the Middle East, Europe and the Americas is a great marketing tool for us to show what makes Bentley such a highly desirable product.”

Next year sees the 20th anniversary of the Dubai International Boat Show, with more international exhibitors and visitors expected than ever before.

The Dubai International Boat Show is professionally managed and hosted by the Dubai World Trade Centre (DWTC) which provides more than three decades of experience in delivering world-class events in the Middle East,featuring local, regional and international exhibitors with unmatched expertise and in-depth market knowledge. The extensive portfolio of leading trade and consumer brand events includes GITEX TECHNOLOGY WEEK, Gulfood and Dubai International Motor Show. The DWTC’s commitment to ongoing innovation within the exhibition industry has supported the rapid growth and development of a wide range of business-to-business and business-to-consumer shows, and delivers consistent satisfaction to exhibitors and visitors. DWTC works with the leading trade bodies and industry associations to ensure that all exhibitions deliver full value, and are built upon the real needs of their specific sector.
Posted by Imre Solt at Tuesday, March 29, 2011