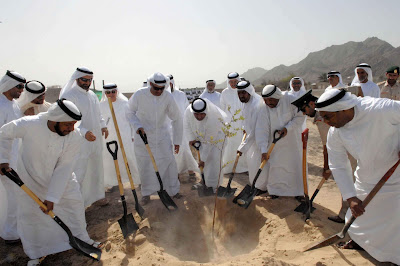 Dubai Municipality has recently launched a campaign aimed at planting around 40,000 different trees in Hatta region. The move is part of a plan for greening 30% Hatta's land. The campaign includes allocation of 4 hectors for a nursery of local plants.

This was stated by Eng. Hussain Nasser Lootah, Director General of Dubai Municipality, who noted that the first phase of the plantation project includes cultivation of 10,000 trees in Hatta.

The campaign is being implemented as part of the execution of the directives of the UAE Vice President, Prime Minister and Ruler of Dubai His Highness Sheikh Mohammad Bin Rashid Al Maktoum regarding intensive plantation programme in different parts of the Emirate. The project shall be completed in four phases planting 10,000 trees in each phase.

According to Mr. Lootah, DM shall pay high attention for the above project abiding by its duties in accordance with the best practices fulfilling the targets, aspirations and hops of the people and visitors.

"Hatta has been selected for this project considering its attractive nature and related conveniences. The plantation sites include Hatta Fort roundabout, internal streets, the main road to Hatta roundabout, road to State of Oman …etc.," he said.

"The project targets to convert Hatta to a green land in line with the mountainous nature of the region as well as to increase the opportunities for domestic and external tourism by converting 30% of its land to green plots and preparing them as locations for travelling, games and related entertainments," said Lootah.

Apart from naturally growing plants, the treated drainage water from Hatta Water Treatment Plant also shall be utilized for the project. This water is expected to be doubled from 250 to 500 gallon per day in the immediate future.

The plants are selected considering its capacity to grow in the area overcoming the hard environmental aspects and the possibility to get its own water and nourishment. These plants are distinguished by its immunity against the botanical diseases and capacity to prevent soil erosion, fight desertification and prevent the sand encroachment in addition to its significant role in producing oxygen and purifying atmosphere.

Mr. Ahmad Abdul Kareem, Director, Public Parks and Horticulture Department said that the department will provide the areas allocated for the project with a drip irrigation system enabling the roots of plants to grow in depth and reach into the natural ground water. This system shall be stopped after five years leaving the plants to depend on themselves and shall be diverted to the new areas of plantation.

As part of the campaign the Municipality has allocated four hectares to establish a special nursery for fruitful plants of local environment so as to extend its services to the people of the region similar to the services provided by the central nursery in Dubai city.

Mr. Abdul Kareem praised the people of Hatta for their constant support and cooperation which encouraged the Municipality to take a decision for the launching of this campaign and extend its agricultural services to the people of the region, adding that the civic body will start planting the surrounding areas of the residences of the citizens based on applications to the Municipality.

The plantation campaign has been launched with the participation of the local people in the presence of a number of officials from the government and federal departments.
Posted by Imre Solt at Monday, May 18, 2009