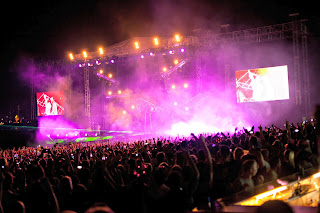 The French DJ David Guetta amazed fans yesterday at Live Atlantis Dubai, UAE, 4 May 2013: The French DJ David Guetta amazed fans yesterday at Live@Atlantis with the most impressive performance and light show at Atlantis Beach. Thousands of fans were listening to their favourites and when Akon joined Guetta on stage the crowd went ecstatic. The Grammy-winning Guetta is known for partnering with a variety of rap and pop stars for hits including When Love Takes Over (Kelly Rowland) and Titanium (Sia). Atlantis, The Palm has introduced a series of live entertainment events through the home-grown platform of “Live@Atlantis”. The eclectic mix of concerts includes live performances from award-winning acts and world class DJs originated from international markets. In 2013, “Live@Atlantis” has hosted events for the Indian, Arabic and European markets, and moving forward we have back-to-back live events in May which will appeal to the Russian-speaking market, and due to the previous successes there will be further events for the European and Indian markets. The success of Live@Atlantis is reflected in the thousands of guests who attend each event. The tickets sales are often 10,000 +. About Live @ Atlantis Live @ Atlantis is a live entertainment experience held exclusively on the beach at Atlantis, The Palm. All year-round, Live @ Atlantis showcases an eclectic mix of concerts and live performances from global, award-winning music acts and world-class DJs. International and local guests revel in the combination of globally-renowned musical icons, an incredible atmosphere and an unforgettable location. About Atlantis, The Palm in Dubai Atlantis, The Palm is the first entertainment resort destination in the region and located at the centre of the crescent of The Palm in Dubai. Opened in September 2008, the unique ocean-themed resort features a variety of marine and entertainment attractions, as well as 17 hectares of waterscape amusement at Aquaventure Waterpark, all within a 46 hectare site. It is home to one of the largest open-air marine habitats in the world, with over 65,000 marine animals in lagoons and displays including The Lost Chambers Aquarium, a maze of underwater corridors and passageways providing a journey through ancient Atlantis. Aquaventure features 18 million litres of fresh water used to power thrilling waterslides, a 2.3 kilometre river ride with tidal waves and pools, water rapids and white water chargers. Dolphin Bay, the unparalleled dolphin conservation and education habitat, was created to provide guests a once in a lifetime opportunity to learn more about one of nature’s most graceful mammals. Atlantis, The Palm is also known as the culinary destination in the region with a collection of world-renowned restaurants including Nobu, Ronda Locatelli and Rostang. The resort boasts an impressive collection of luxury boutiques and shops as well as extensive meeting and convention facilities.
Posted by Imre Solt at Saturday, May 04, 2013